LOCO is suitable in a setting where the number of features \( p \) is very large so that splitting the design matrix across features rather than observations is reasonable. For instance, the number of observations \( n \) can be smaller than \( p \) or on the same order. LOCO is expected to yield good performance when the rank of the data matrix \( \boldsymbol{X} \) is much lower than the actual dimensionality of the observations \( p \).

One large advantage of LOCO over iterative distributed algorithms such as distributed stochastic gradient descent (SGD) is that LOCO only needs one round of communication before the final results are sent back to the driver. Therefore, the communication cost – which is generally the bottleneck in distributed computing – is very low.

LOCO’s distribution scheme is illustrated in the following figure. 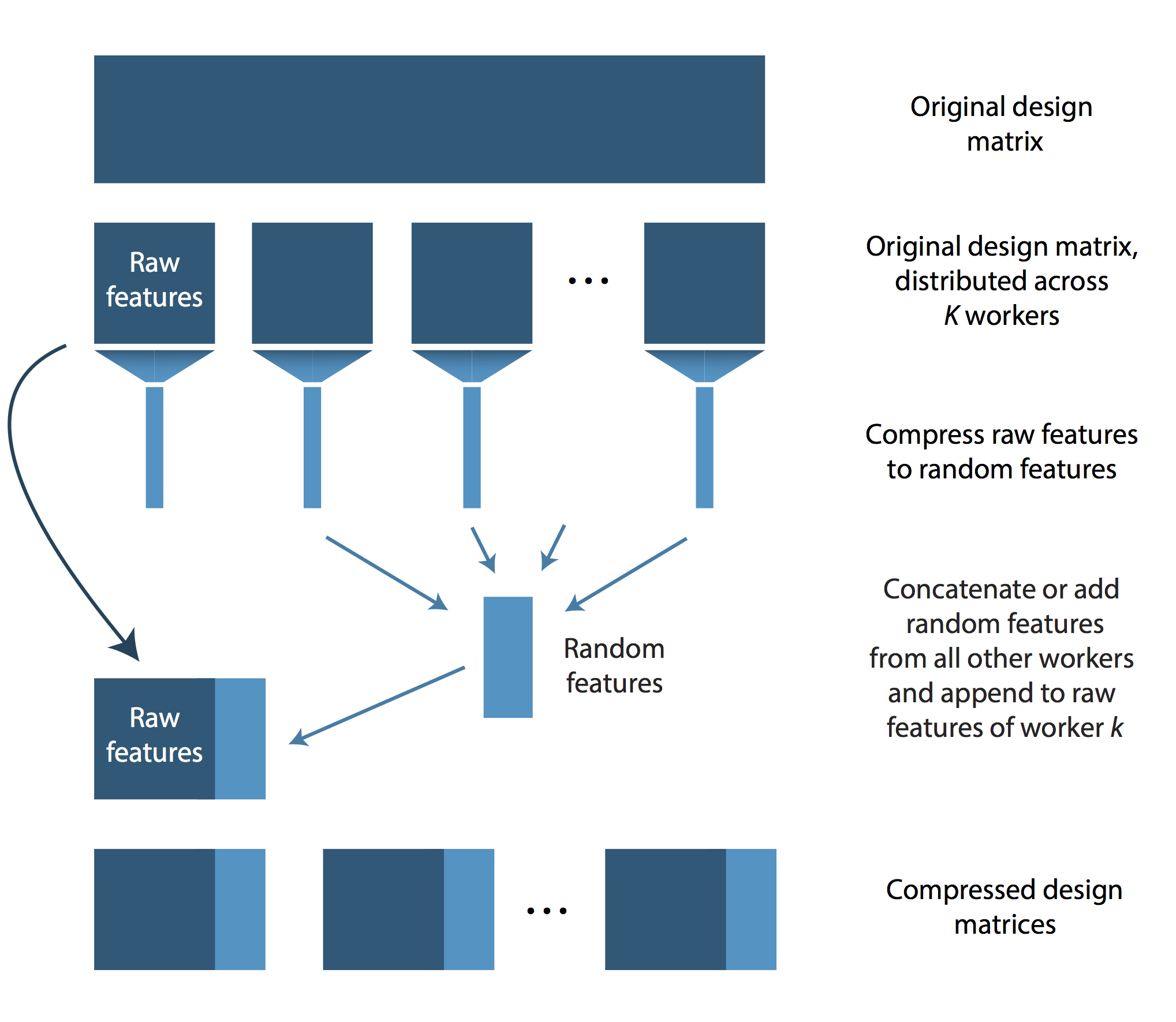 A preprocessing step is required to distribute the data across workers according to the features rather than the observations. For this step, we provide the package “preprocessingUtils”.

and build the packages with

To run LOCO locally under Windows, we recommend using Spark 1.3.1, download winutils.exe, move it to DISK:\FOLDERS\bin\ and set HADOOP_CONF=DISK:\FOLDERS.

To run ridge regression locally on the ‘climate’ regression data set provided here, unzip climate-serialized.zip into the data directory, download a pre-build binary package of Spark, set SPARK_HOME to the location of the Spark folder, cd into loco-lib/LOCO and run:

The estimated coefficients can be visualised as follows as each feature corresponds to one grid point on the globe. For more information on the data set, see LOCO: Distributing Ridge Regression with Random Projections. 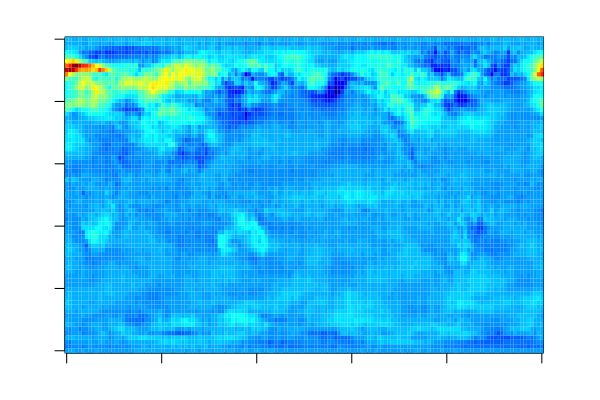 To train a binary SVM with hinge loss locally on the ‘dogs vs. cats’ classification data set provided here, first preprocess the text file with the preprocessingUtils package (see below) and run:

The following list provides a description of all options that can be provided to LOCO.

saveToHDFS True if output should be saved on HDFS

readFromHDFS True if preprocessing was run with saveToHDFS set to True

nPartitions Number of blocks to partition the design matrix

nExecutors Number of executors used. This information will be used to determine the tree depth in treeReduce when the random projections are added. A binary tree structure is used to minimise the memory requirements.

useSparseStructure True if sparse data structures should be used

checkDualityGap If SDCA is chosen, true if duality gap should be computed after each iteration. Note that this is a very expensive operation as it requires a pass over the full local data sets (no communication required). Should only be used for tuning purposes.

stoppingDualityGap If SDCA is chosen and checkDualityGap is set to true, duality gap at which optimisation should stop

projection Random projection to use: can be either “sparse” or “SDCT”

concatenate True is random projections should be concatenated, otherwise they are added. The latter is more memory efficient.

kfold Number of splits to use for cross validation

lambdaSeqFrom Start of regularisation parameter sequence to use for cross validation

lambdaSeqTo End of regularisation parameter sequence to use for cross validation

lambda If no cross validation should be performed (CV=false), regularisation parameter to use

The preprocessing package defines a case class LOCO relies on:

The case class FeatureVector contains all observations of a particular variable as a vector in the field observations (can be sparse or dense). The field index serves as an identifier for the feature vector.

To use the preprocessing package

download the ‘dogs vs. cats’ classification data set provided here, unzip dogs_vs_cats.zip into the data directory, change into the corresponding directory with cd loco-lib/preprocessingUtils and run:

The following list provides a description of all options that can be provided to the package ‘preprocessingUtils’.

outdir Directory where to save the converted data files

saveToHDFS True if output should be saved on HDFS

nPartitions Number of partitions to use

dataFormat Can be either “text” or “object”

sparse True if sparse data structures should be used

textDataFormat If dataFormat is “text”, it can have the following formats:

trainingDatafile If training and test set are provided in different files, path to the training data file

testDatafile If training and test set are provided in different files, path to the test data file

proportionTest If training and test set are not provided separately, proportion of data set to use for testing

outputClass Specifies the type of the elements in the output RDDs : can be LabeledPoint or DoubleArray

secondOutputClass If twoOutputClasses is true, specifies the type of the elements in the corresponding output RDDs

centerFeatures True if features should be centred to have zero mean

centerResponse True if response should be centred to have zero mean

scaleFeatures True if features should be scaled to have unit variance

scaleResponse True if response should be scaled to have unit variance

Note that the benefit of some of these setting highly depends on the particular architecture you will be using, i.e. we cannot guarantee that they will yield optimal performance of LOCO.

The LOCO algorithm is described in the following papers: